A few crocuses have sprung forward this late February, and early spring is on her way. Another winter cycle coming to completion brings forward the opportunity for frozen land to turn to moist earth and support the blooming expressions of fertility.

The paddocks are wet after our last storm, with mounds of manure frozen in ice and sludgy brown water flowing to the low side of the land. The fragrance is pungent and earthy, and the fumes penetrate into every pore of my clothing until I feel through scent alone that I am one with the herd. 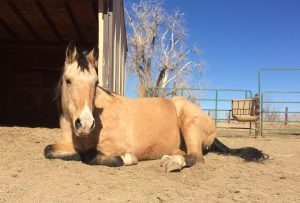 Moon, the shaman, continues to sleep late every morning for at least two hours. He looks good for twenty-five; however, he is slowing down. One morning I saw Moon acquiesce to Scotch during feeding time by walking a full circle around her bubble as she ate her hay. In fourteen years, I have never seen him demonstrate this behavior with any horse. I knew at that time that the change of command had begun. The tide is turning, and although he accepts it with grace, my heart struggles to see the beginning of the decline of my big man Moon. I am sure he will be teaching me a lot about the later cycles of life and embracing what “is” and what is given.

Ginger, the youngest of the herd at four years old this month, has very little winter coat to let go of, as her youth requires less insulation. Her body is trim and toned, and her legs keep getting longer. She is as tall as Moon and loves to run. She is very clever and outspoken, with a young, dominant personality, although with a lot still to learn. Clearly, she will need a bigger job than what I might be able to provide her at my ranch. Her deep affinity toward Scotch is mysterious and enigmatic.

Scotch, having only been here for three months, has found her place. A more secure, dominant leadership style has emerged. She tends to be anxious, and when these moments strike her, she has a one-track mind trying to get to a place that she feels safe. Her concern for anyone else’s safety disappears, and one could easily get run down if they did not understand the body language of an anxious horse. A bright energy, full throttle horse, she and I will soon work together to remind her that politeness is required for all humans. She is currently integrated with everyone in the herd except Corazon. 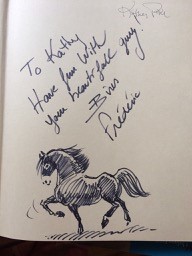 (Pictured here is Frederic’s drawing of Corazon inside his and Magali’s book.)

Corazon has reached a new level of maturity. He is calmer and more observant versus his high-strung, reactive disposition that many have experienced. He had an amazing time at Frederic Pignon’s clinic last fall when he and I worked at liberty. Although he was clearly on the verge of colic the first day, he did his best. By the last day, he offered his true spirit and aliveness. I worried he would be a difficult horse, having not left my property much. In fact, he ended up being one of the calmest, and his curiosity (versus fear) about the pigs, alpacas, and assorted types of horses amazed me.

When Frederic asked him for his Spanish walk, on the second ask, Corazon offered not one, nor two strides, but three full strides with his front legs swinging high and proud (typically it takes time to even get two consistent strides from opposing legs). Frederic stopped and shook his head in amazement, saying, “The level of intelligence of this being!”

Back at home, his lively winter expressions have been ample. He is never without displaying rears, snorts, charges, and bucks on the cold crisp snowy mornings, letting his dissatisfaction with the timing of his feeding be known to me.

Diva
More of the hair from my beloved herd is released into the spring winds as I brush them in the warm sunlight. Diva wins the award for “fuzzy bear” this winter, with her coat being the thickest I have ever seen. She continues to be the “kind” mare, as both Ginger and Scotch push her around sometimes, just to make a point. Never taking offense, she is calm and accepting of their unruly behaviors. She is not weak or submissive; she simply steps away from the nonsense, knowing when it is all said and done that both horses will come back to her for their sense of security.