Many years ago, when I first got Moon, I boarded him at a public facility. This was a huge mistake. To my astonishment and dismay, he arrived at the ranch looking 30-years old. He was infested with ticks, underweight, and utterly depressed. It turns out that the owners had sent him to a holding facility a few months before he came to me. That transitional experience took a toll on his heart and health. It was heartbreaking.

When I asked the barn manager how we would integrate my depressed and underweight horse into the herd, he said, “Simple, we just throw him in there and everyone (about 20 horses) will sort it out.” As a high sensitive, you can imagine my discomfort with this idea. However, because I lacked enough horse experience at the time, I released my personal power to the barn manager.

Over the next several days, Moon was beaten by the herd, receiving many nicks, bites, and bruises. I swore to myself that, if I ever had the privilege to own my own ranch, I would find safer and less traumatic ways to integrate horses into the herd. Thankfully, Moon did eventually recover, putting on weight, growing stronger, and gaining back his confidence. 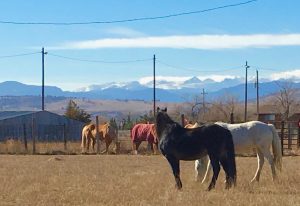 Today, I am blessed to have a sweet little horse property where I manage the horses. I still believe that there is no need for any horse to suffer as he or she is integrated into a new herd. My knowledge about this process has grown exponentially as I integrated four females and several males into the herd at different times over the last seven years.

Esperanza came to live at my ranch in June of this year. At first, I kept her in a pen away from the others so I could check her worm egg count, plus give everyone in the herd plenty of time to “look her over.” Slowly, I went about integrating her with each individual member of the herd, giving them full time to get to know each other. That said, I waited a full five months for what I deemed to be the best timing for integrating Esperanza with my mustang Corazon, who exhibits stallion-like behaviors and often can be aggressive with new mares.

One day last week, I woke with a strong feeling that it was the day. As I walked out to the paddocks, I saw that my neighbor of six years was putting his barn sour horses out to the pasture next to mine for their very first time in many years. My first thought was, “Bummer, can’t do it today as Corazon will go crazy with all of those new horses to meet. It would be chaos.” Then, as I stopped and reflected, I realized that the truth was the exact opposite. It was a perfect time. I could utilize his strong drive for rounding up mares and protecting his herd to my advantage.

I let Corazon out of the paddock and he was hot to trot. He immediately headed to the fence line where he and the lead mare of my neighbor’s herd began a very noisy conversation accented by some foot stomping, posturing, and diving for each other’s necks with white flashes of teeth. When their conversation calmed down, I then proceeded to put Esperanza out, leaving Moon in his paddock where he could watch without getting caught up in a big run around (he’s much older now and has arthritis). I left Diva next to him so he would not feel completely deserted.

Once Esperanza was out, Corazon came racing across the field and, for a split second, I doubted my actions. Did I make the wrong decision? However, he simply shoed her over toward Moon and Diva as he turned and postured to the other herd, clearly communicating that he was the lead stallion of his herd. Corazon then ran back over to the neighbor’s horses for more conversation with the lead mare. My next step was deciding to let Diva out. She was curious and ran on over with Corazon. Esperanza followed as Moon watched, ears forward and bright-eyed. 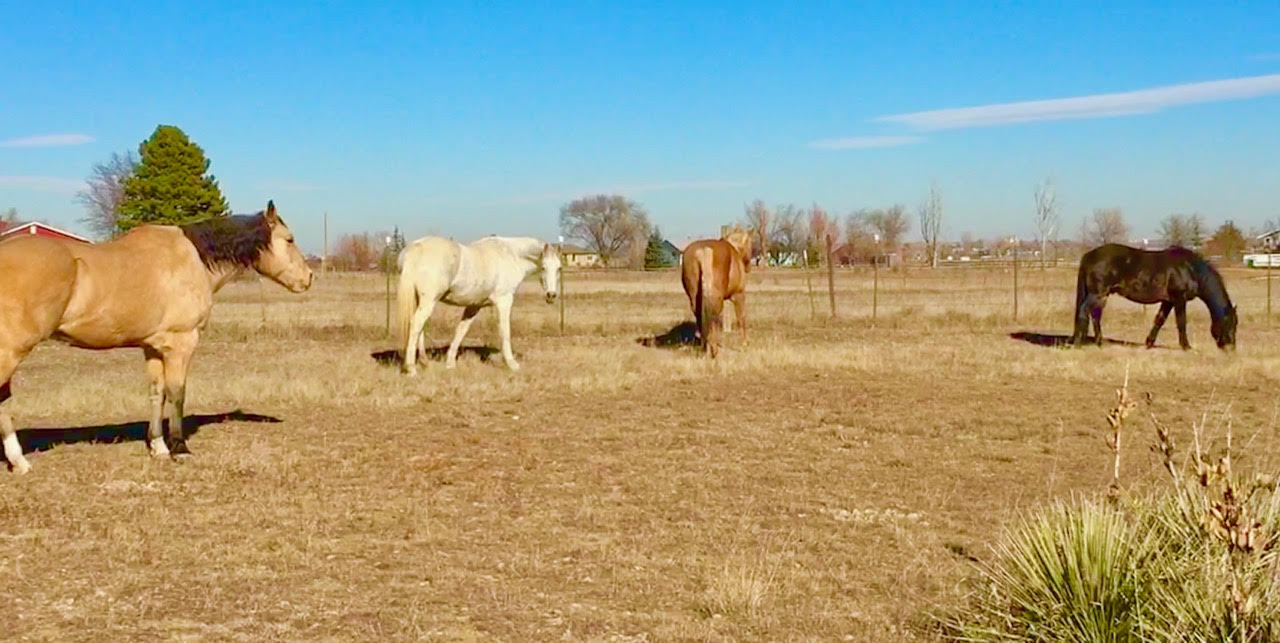 After a few more minutes of noisy conversation with the neighbor’s mare, Corazon turned away and herded his two females over by Moon, again posturing to the neighbor’s herd. I then let Moon out and, as a herd, they began to circle in the field at a light canter. What a deliciously magical moment, seeing this colorful herd move together as one! Everyone went to say hello to the neighbor’s herd and, after some more lively conversations, Corazon moved his herd off and to the backfield. Moon got busy herding Diva into the corner as Esperanza sheepishly hid behind Corazon.

You may be thinking, “Isn’t this really just throwing them all together with a brand new herd to meet?” The answer is no. I always take specific steps before my herd is at liberty with a new horse. Even with the neighbor’s horses, I introduced one herd at a time to prevent a chaotic amplitude of energy needlessly putting horses at risk of injury.

It took a five-month process before Esperanza was at liberty with the entire herd. The neighbor’s herd functioned as a distraction to redirect Corazon’s often-aggressive behavior concerning new mares toward creating and protecting his own herd. This resulted in an unconscious moment of positive reinforcement, bringing Esperanza into the herd. In those moments, his actions of “protecting his herd” sealed the deal with the members of the herd. He did not have the time to try to split the herd into two pairs or aggressively chase off the new mare. What a beautiful moment! After everything was done, I took a big breath and thought, “Everything is always working out for me!”

So, what were the steps that helped Corazon accept this mare into the herd?

All of these smaller steps were key. The slow pace meant that no horse ever felt overwhelmed, preventing their consciousness from moving into flight-or-fight and losing all sense and connection to their brain. Then the magic of my neighbor’s horses being put to pasture (first time in five years) worked to my advantage. Corazon was focused on protecting his entire herd, rather than trying to keep Esperanza away from Moon and Diva.

Everything in life is about timing. It’s about sensing the moments that are prime for a new unfolding and having the courage to take a chance and step forward into those opportunities. In this particular herd example, many positive steps were taken toward the end goal.

As humans, when we stay conscious about the timing of events in our lives and listen to the messages of our heart and gut, we make choices and take actions that lead us to new discoveries and integrations that may have felt impossible at one time. As the New Year rolls in, it is a perfect time for you to reflect on what you most want to “integrate” into your life and what the steps are toward that bigger dream. I offer these questions below for reflection and journaling as you enter 2019.

Everything is in its right timing. Yet, we can’t become apathetic and lose traction toward forward movement. We must not allow ourselves to feel that our vision is not attainable. Spend some time as 2019 begins to gain clarity about your vision and how you will integrate it into your life with ease and grace. You have been gifted this one glorious life that is yours to express, create, and explore as you desire and ignite courage to do so. What are you waiting for?