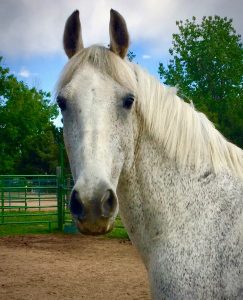 Esperanza came to my ranch in early June of this year. As a half-Friesian and half-Polish Arab, her presence was dazzling; large, excitable, and engaging. Her energy felt big and powerful, but at the same time, nervous. She had lots of questions about her new home and her new herd mates.

Esperanza stands 15.2 hands, so in reality, she is not a big horse. Moon, my elder, stands at 16.2. Yet, when the two of them were close by each other, Moon felt dwarfed next to her. Moving Esperanza around took a solid presence and a direct, confident, and focused handler. As a “big girl” who had received very little ground training, she tended to treat humans as she does other horses. Her understanding of personal space and respecting the personal space of others was lacking.

I wish I could say I started working with her right away and she got integrated in no time whatsoever. The reality was that all summer I was dealing with an arm injury. I could not lift or move it with ease; even carrying a small whip was out of the question. So, Esperanza worked in programs, grazed in the fields, and slowly was let out with each member of the herd when I deemed it to be a safe situation.

I was astonished at how eager she was to learn several of the routines of the ranch. She was always the first to come in, at full gallop, heading right back into the stall she had been in. Then she would turn and look at me with inquisitive eyes. She was more than happy to demonstrate cooperation in hopes of staying on at the ranch.

She and Corazon (a wild horse until he was five years old who still acts like a stallion) have still not been let out together. Every day, I watch them very closely to see when and where aggression is displayed by either of them. Recently, I’ve had them eat next to each other along the fence line of their paddocks. Over time, things have changed from Esperanza not daring to go to eat her hay at all, to her sneaking a few bites, to her then kicking out at Corazon and the two of them squealing and quarrelling. Today, they eat peacefully next to each other, while also sneaking bites from each other’s piles, still separated by the metal fence. As of late, I have been putting their new slow feeding bags on the fence and they eat out of the same bag. The ears are no longer pinned and their bodies and muscles are relaxed. Soon, I will place them in a big field together. 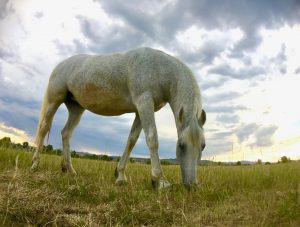 Through this process, Esperanza has shrunk (energetically-speaking), or at least that is how it has appeared to me. In all actuality, the nervous energy produced in her body and mind caused by her transition into my herd has started to diminish. Her first energy center, located at the base of her spine, is where safety and trust are processed. This area was initially activated and overcharged. When she arrived, she was unsure of who she was and of her place in the herd. Slowly, she shared space with Moon and Diva and established her position with them. She became more confident and settled in her space and understanding of the ways and routine of the ranch. Her first energy center moved from expressing excessive energy based in fear and uncertainty into a more balanced grounded energy as she developed a stronger sense belonging.

Of course, she has not changed in physical size at all. It is the energy bubble around her, her energy field, which has changed in the quality of vibration that now gives her a different appearance. We have all seen this expressed in our human-to-human relationships. When a person is afraid, uncomfortable, or unsure of how they belong in a group, they will compensate by either pulling their energy in and getting smaller or by projecting the energy outward into their field, creating a static buzzing. Esperanza did the latter.

I will be putting her with Corazon in these next two weeks and I am very conscious about how to do this. Many barns will simply throw the horse in and let them all “sort it out.” I’ve experienced this first hand when I was new to horses and allowed this to happen to Moon. It was not a pretty sight. As Moon had been in a holding facility where he received many bites and bruises, he was depressed, thin, and completely unsure of what was happening to him. He had pulled all of his energy inward as a coping strategy.

Out of respect for my mustang, I prefer a more patient step-by-step process to preserve the health and well-being on a physical and emotional level. Corazon has demonstrated his way of being in the world includes beating on new members of the head ruthlessly and not giving in.

This story demonstrates how important it is for us to remember to see everyone, be it a human or a horse, as their own individual, and that the energetic expression of that individual may change, for better or worse, over time. Our job is to experience the energy of that being, assess what that energy is expressing about the individual’s current state of mind and body, and then support the unfolding of the being’s experience without pushing an agenda or forcing an issue.

Who in your life, human or horse, is currently going through tremendous change?
What can you perceive is shifting in their energy field during this change?
How might they benefit through your non-judgmental observation and sacred space holding of their process?

Esperanza is still 15.2 hands high. What has changed is her demeanor. She is softer now, a little bit more aware of her space and others, and she is more present in her body. It will be interesting to see how this all changes once she is put at liberty with Corazon!

Be sure to leave your comments below. They are important to me!