I often hear clients say, “I am not a creative person,” or some other variation of that sentence with a similar meaning. This has become a source of amusement for me. When I hear these statements the detective in me emerges and I become curious to find the creative side within that person. Every single one of us is born with creative potential. It doesn’t mean we are all artists. It means we see, feel, hear, and experience the world in our own way. We create our life every moment. When we are free of self-judgment and limiting beliefs we have the … END_OF_DOCUMENT_TOKEN_TO_BE_REPLACED 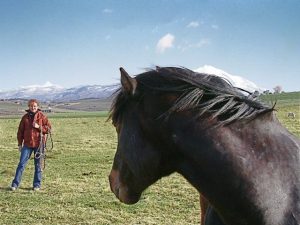 Corazon has been with me for just 1.5 years. It is hard to believe how much has changed in such a short time. The last month I have noticed a significant difference in his demeanor. He still responds with a bit of fright to large dark objects he has not seen before and prefers not to walk next to trailers - a slab of ice sliding off the roof may give his body a jolt. However, he has settled into his new life and continues to shed his hyper protective instinctive reactions. … END_OF_DOCUMENT_TOKEN_TO_BE_REPLACED 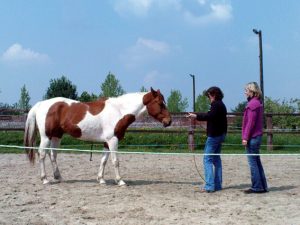 Fear. It has the power to stop us in our tracks. Other times fear can be so strong we want to fight back or run away. Sometimes it works subliminally to sabotage our dreams, our life path, and the possibility of living our passion. Fear can make us small. The positive side of fear is that it keeps us physically, emotionally, and spiritually safe. Ask any person who has achieved any life or physical goal and they will tell you that they listened to their fear but also had to face their fears to advance themselves. In my book, Hope...through the Heart of … END_OF_DOCUMENT_TOKEN_TO_BE_REPLACED

Last week during and Equine Facilitated Leadership program for a corporate group. Once again the horses and participants warmed my heart. We spent the morning meeting the horses and preparing for the afternoon sessions. During the afternoon we engaged with four different horses. A horse named Gypsy shined as a teacher. Gypsy is the head mare of the Medicine Horse Program herd (located in Boulder). On this day she worked with two men and one woman. The sessions focused on establishing boundaries and respect in the relationship, and then asking the horse for … END_OF_DOCUMENT_TOKEN_TO_BE_REPLACED

In my last article I talked about how horses are teachers for humans in areas of personal, emotional and spiritual growth. What a person holds emotionally in the body, and mentally in the mind, affects how a horse responds to them. Interacting with a horse on the ground can teach a person a tremendous amount about them selves (if one is willing to listen). Horses also serve humans when they are ridden. For years now therapeutic riding centers have employed horses to carry mentally, developmentally or physically disabled children and adults on their backs as a … END_OF_DOCUMENT_TOKEN_TO_BE_REPLACED 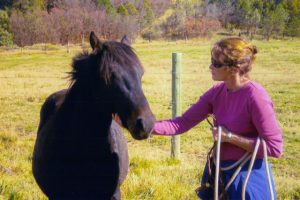 When I came back to working with horses, after being thrown and dragged, I had a lot of inner work to do around fear. My horse Moon helped me work through my fears while riding. I practice the Mind Body Method (a coaching process I developed) to slow down my automatic responses and stay present in my body. Moon helped me integrate new positive ways to be with my fear instead of the old trauma loops and breakdowns based in dissociation. … END_OF_DOCUMENT_TOKEN_TO_BE_REPLACED

During a week long Equine Facilitated Learning workshop here in Colorado, that focused on exploring one’s authenticity and emotional agility with horses, a participant asked one question several times. The question she asked was: “How do I know what to do if I don’t know my final vision?” This questioned plagued her. She felt stuck about taking any action in her life. I suggested she listen to and take action towards the next thing that would bring her happiness. I suggested she listen to her heart and inner guidance. Each time she follows what feels best to … END_OF_DOCUMENT_TOKEN_TO_BE_REPLACED 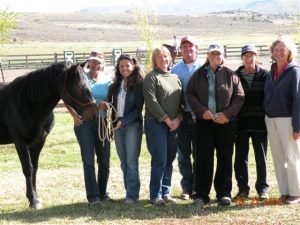 Corazon de la Montana taught his first group of students in EFLC work. Corazon, black and brown in color, small in size and BIG in energy and heart touched each person. Before the group arrived I placed Corazon in the round pen. He stood and watched as the cars slowly drove down the long driveway. Once all of the participants were seated outside of the round pen Corazon walked over to them and stood silently. Slowly his eyes gazed upon each person blinking occasionally. I asked the group what they were experiencing with Corazon; no one spoke. They all … END_OF_DOCUMENT_TOKEN_TO_BE_REPLACED 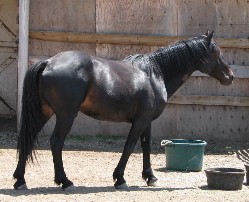 Corazon (aka Romeo) coliced on July 5th. After a stressful night he was taken to the vet at 10pm. The vet did everything he could to make him comfortable. When I arrived in the morning he had a temperature and was in complete distress. Once he stabilized they put him back into his tiny white stall. It was a long day. I was alone and the only thing I knew that I could do was to massage him. I massaged him on and off for six hours stopping only to take him out to walk. I had to leave him at 9:00pm. When I walked into my home the phone rang, it was the vet letting … END_OF_DOCUMENT_TOKEN_TO_BE_REPLACED 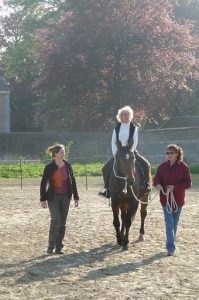 Equine Facilitated Learning and Coaching Finding the right words to express the special way that horses help humans to grow their awareness has been a thought provoking process. I have chosen to use Equine Facilitated Learning and Coaching (EFLC) as I see it includes the horse and the human as partners in providing personal and professional growth experiences for individuals and groups. I reflected on the meaning of each word: … END_OF_DOCUMENT_TOKEN_TO_BE_REPLACED 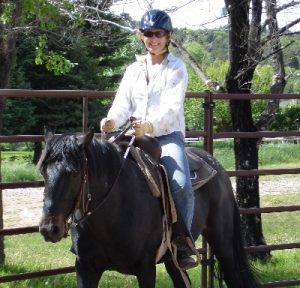 Corazon de la Montana, a 7 year-old mustang, deemed un-trainable and un-rideable by BLM (Bureau of Land Management), was branded with the numbers 5298 on his hip and placed in a holding facility to live the rest of his life, along with thousands of other mustangs that will never see freedom again. The holding facility might be called a ‘reservation’ for mustangs. One year ago I adopted Corazon from Ginger Kathrens who has been filming the Pryor Mountain Herd for the past 15 years. She was able to get Corazon out of the holding facility. Corazon (also called … END_OF_DOCUMENT_TOKEN_TO_BE_REPLACED 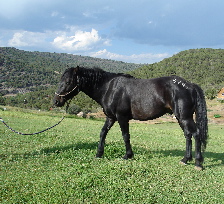 It seems that at some point in every relationship there is a chance that trust will be broken. The question is if it can be repaired, mended, and eventually create even a deeper level of connection and bond. Corazon de la Montana, sometimes also called Romeo, continues to teach me about the importance of trust in a relationship. His wild ways and highly tuned instincts examine my motives and my levels of leadership every day I see him. I am convinced he knows me better than I know myself. … END_OF_DOCUMENT_TOKEN_TO_BE_REPLACED

A few weeks ago I facilitated Advanced Equine Facilitated Learning workshop here in Colorado. There are several components to the advanced work, including horse dancing. Horse dancing is a way to explore fluid movement and connection with a horse with no set instructions or plan on what will transpire during the dance. Each participant selects the horse they want to dance with and the music which most resonates with them. Typically in these sessions when a person is body-centered, free of agendas and fully present to the moment, the horse, and the music, a … END_OF_DOCUMENT_TOKEN_TO_BE_REPLACED 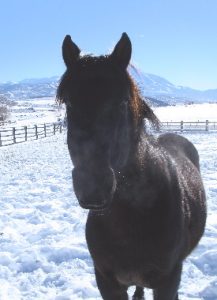 Corazon has been in training for the past two months. It has been a wonderful growth period for him and I marvel as he demonstrates a high desire to understand what is being asked of him. He wants to please. It is important to blend training with other unexpected moments of sharing. These moments keep your horse curious and excited about interacting with you. It breaks up the flow and prevents redundancy. Yesterday, I arrived at the barn and Hugh, my trainer, was not there. I decided to walk on out to the gelding pasture. On the far side I saw Corazon. He … END_OF_DOCUMENT_TOKEN_TO_BE_REPLACED

Corazon is doing well! He has been a great partner with the groundwork. He now allows me to lift all of his feet, he understands my commands with a stick and a rope and moves around me willingly with grace and strength. He backs into all the gates I can find on the ranch, has been in the indoor arena, and easily jumps over the small jumps I make for him. I have begun to prepare him for the saddle and he is learning to accept the blanket and also some tightness around his girth. Each day we do something different and I move deliberately and confidently with him, … END_OF_DOCUMENT_TOKEN_TO_BE_REPLACED 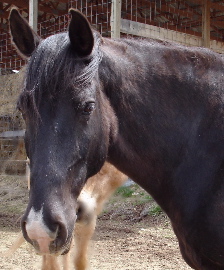 Last week the season kicked off with six lovely ladies who are part of the Equine Assisted or Equine Experiential Learning Facilitator Training for the year. We had a full week of wonderful activities with the horses. It is easy to see how horses help humans to heal. Does the interaction in round pen sessions help the horse? … END_OF_DOCUMENT_TOKEN_TO_BE_REPLACED 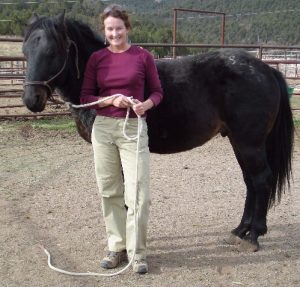 A new member of my herd has arrived. His name is Corazon de la Montana, which means Heart of the Mountain in Spanish. Corazon is 14.2 hands, his coloring looks black, with some deep brown around his nose. Officially he is called a Brown.  Corazon was labeled as unadoptable and untrainable by the BLM, branded with the numbers 5293 on his butt, and placed into a holding facility. The holding facility is pretty much a dead end place for horses who were previously free on public lands. Holding facilities are a dead end for wild horses. Once there they will spend … END_OF_DOCUMENT_TOKEN_TO_BE_REPLACED 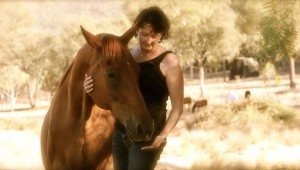 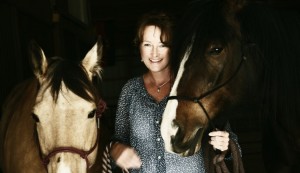 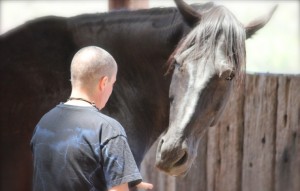